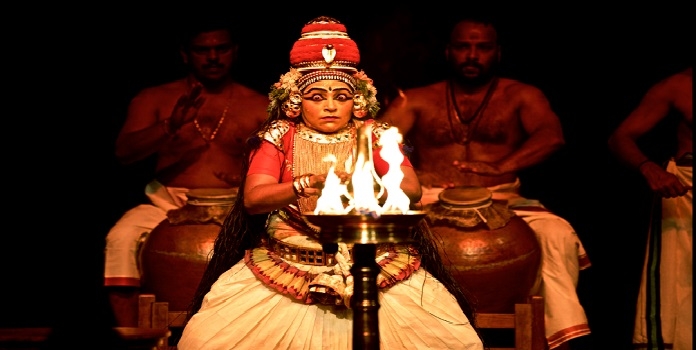 Ramayana was composed in Sanskrit probably about 300 B.C. by Valmiki and its present form consists of 24000 couplets (slokams) divided into 7 kandams (books). Cutting across the rational boundaries and family of languages Ramayana attracted all kinds of people. It has so many translations in to the vernacular languages and it enriched literary out put of almost all languages of India and neighboring countries. Recitation of Ramayana is considered as an act of worship even today. The birth, the marriage and the death are important events in human life, and on all these occasions, Ramayana occupy a significant role in Indian life, especially in Kerala.
He influence of Ramayana in Kerala can be classified into two streams viz. 1. literature based on Ramayana 2. cultural traits which shows Ramayana influence. The first group may be classified into (A) Translations (B) Independent creative works (C) Folklore (D) Poems having indirect influence (E) Prose literature. Cultural traits which shows Ramayana influence covers a wide area such as family set up, personal names, customs, sculptures, wall pictures, place names and temples
Literature based on Ramayana Translations
Translation of various Ramayana are available in Malayalam from 14th century C.E. onwards rightly from the composition of Ramacaritam by Cirama. On verifying the translations available, one can see different approaches rendered such as word by word, free and abridged modes.
B. Independent works
Ramayanam story was the major source for literary compositions in Malayalam right from the period of its evolution. Almost all literary genres in Malayalam unearthed the treasures hidden in this great epic of Valmiki. Thanks to innumerable folk and temple centered art forms for their effective use of Ramayana theme by keeping its sanctity and humanistic vision. Art forms like Kuttu, Kutiyattam, Pathakam, Kathakali, Tullal, Tolpavakkuttu, Teyyam, Purakkali, Pateni, Villaticcan pattu etc. are worthy to mention here due to their role in the circulation of Ramayana stories in Kerala. Cakkiyars, the traditional performers of Kuttu and Kutiyattam mainly followed Ascarya cudhamani a Sanskrit drama, of 8th century C.E. from Kerala for enacting their classical arts in temples. Here follows a selective list of Malayalam works on Ramayanam stories fully or partially used for performing various arts inherited by the God's own country.
1.Kuttu and Kutiyattam
Literary works used for staging this classical art is mainly from Sanskrit. Dramas of Bhasa, saktibhadra and Kulasekhara Varma is the chief source for telling Kuttu and performing Kutiyattam. Both Kuttu and Kutiyattam performances of Kerala is conspicuous with its antiquity and its adherence to 'Natya sastra' by Bharata. The text which describes various aspects of staging a stroy is called Attaprakaram. Attaprakaram which explains the performance of Ramakatha (story of Rama).
2. Attakkatha
The literary work meant for staging Kathakali is called Attakkatha. The major works are:
1 AhalyamokSam Udayavarma Puttan Kottaram, Mavelikkara
2 AhalyamokSam Virakerala Varma Tampuran, Kochi
3 OuSadhaharanam Narayana Menon, Vallattol