Ezhuthachan – The Father of literary tradition in Malayalam 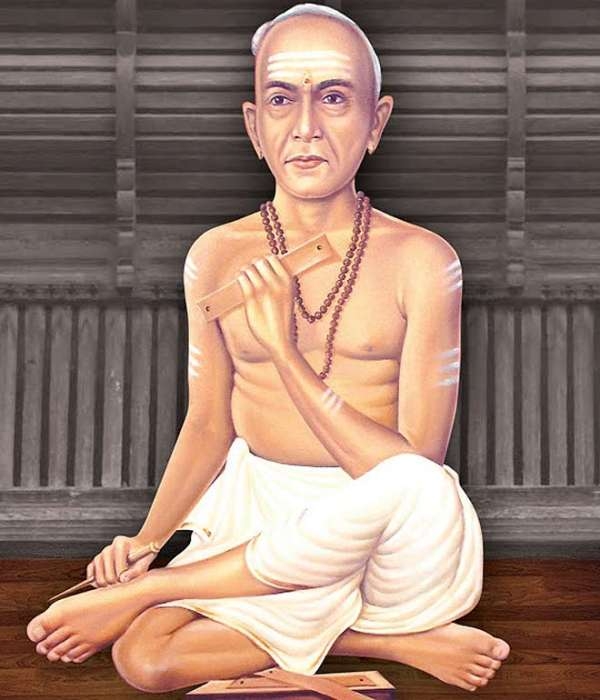 'Ramayana Masam' is an important observance in the state of Kerala. It is observed in the month of 'Karkidakam' of the Malayalam calendar. 'Karkidakam' is a month of rain and poverty. 'Ramayana Masam' this year begins on Thursday July 16, with the beginning of Malayalam month 'Karkidakam' and ends on Sunday August 16. While reciting Adhyatma Ramayanam every day, let us take a Sankalp that a statue for the great Ezhuthachan is built at his home village in Mallapuram district and that a Memorial of International standard is built there. Let us call this month as 'Ezhuthachan month.'
In Malayalam literature, Ezhuthachan has a place comparable to that of Tulsidas in Hindi. It is generally accepted that he lived in the sixteenth century. Ulloor Parameshwara Iyer has surmised that Ezhuthachan was born in 1495 AD and lived upto 1575.
Thunchaththu Ramanujan Ezhuthachan, as he was known, was a Malayalam devotional poet and linguist. Today he is known as the 'Father of modern Malayalam language' – the principal language of the Indian state Kerala and the union territory of Lakshadweep – and its literature. Ezhuthachan was born in Trikkandiyoor, near the present day Tirur municipality in Mallapuram district, Kerala. His birthplace is now known as 'Thunchan Parambu.' It is about 25 kms west of Mallapuram and 50 kms south of Kozhikode.

'Ezhuthachan' is a sobriquet given to him as a sign of respect. 'Ezhuthu' means 'writing' and 'Achan' means 'Father' or 'Guru.' 'Ezhuthachan' thus means 'The Guru of writing.' Presently, however, Ezhuthachan stands as a surname in Kerala. His parent's names are not known clearly. Thunchaththu Ezhuthachan's caste is arguable. It is only known that he belonged to a lower caste (Shudra or Shudra-grade). 'Ezhuthachan' caste is a socio-economic caste of village school teachers.
After the birth of his daughter, Ezhuthachan became a monk and wandered throughout Southern India before finally settling in modern day Chittoor, Palakkad. After he settled in picturesque Chittoor village, he erected a Rama temple as well as a Shiva temple and founded his monastery named as Ramanand-ashram. Ezhuthachana’s samadhi is also situated here. In his monastery, he trained a galaxy of famous disciples, such as Suryanarayan Ezhuthachan, Karunakaran Ezhuthachan, Devan Ezhuthachan and Gopalan Ezhuthachan.

Ezhuthachana’s 'Adhyatma Ramayanam', 'Mahabharatam', 'Devi Bhagavatam' and 'Harinama Sankirtanam' are immortal legacy of Malayalam literature. Ezhuthachan's contribution to the Malayalam language is widely considered as unparalleled. He brought massive changes and standardisation in the language through his works.

'Adhyatma Ramayanam' is written with the help of Raghuvansham, Valmiki Ramayanam, Bhojachampu but mainly adopted from 'Adhyatma Ramayanam' written by Maharshi Vedavyas in the latter portion of the 'Brahmand Puran'. Ezhuthachan was basically a devotee of Rama and Krishna. But in 'Devi-mahatmyama', he describes the greatness of the omnipotent goddess.

His books are mostly written in 'Kilipattua' style in which the subject is narrated through questions of the sages put to Shuka, the omniscient mythical bird and his answers. Ezhuthachan had used various prosodic meters such as 'Keka', 'Kakali', 'Slathakakali' etc in his verses. Subsequent poets were greatly influenced by his style and diction. Though the perception regarding man-made differences among men was there in case of earlier writers, Ezhuthachan first attacked this from a higher view, viz., the intrinsic identity of man with the high source of all creation.

Ezhuthachan came at a time when the social scene was rather tumultuous. The coming of Europeans with their evangelizing Jesuit priests had augmented a dreadful era of social, religious and political conspiracy and never-ending conflict. Ritualistic traditions instead of a moral view dominated life. By rendering the morals of the epics in free flowing verses, which could be easily memorized and sung, he achieved a stabilization of ethos, which was profoundly regenerative in the basic faith in divinity, classical in prestige, universal in communicability and reach. This is the main criterion, which made him the venerable father figure of literary tradition in Malayalam.

Ezhuthachan’s vivid imageries such as a frog struggling to get its next morsel of food while speeding down the gaping mouth of a snake describe the precariousness of life. Yet he was not a pessimist. He accomplished a massive synthesis of work and devotion. Get rid of your ego; or enlarge it to an identification of the entire universe, was his message.

Ezhuthachan provided inspiration and guidance to all who sought his help. Meppathur Narayana Bhattathiri, the author of famous 'Narayaneeyam' was a friend of Ezhuthachan. It is said that when he sought the advice of Ezhuthachan about how to start his intended book, he gave him a cryptic advise to start with fish, meaning to start with Matsyavatar - the fish incarnation of Lord Vishnu. Narayana understood the enigmatic message and started composing his magnum opus in the Guruvayur Temple.

The parrot song genre, pioneered by Ezhuthachan, inaugurated the production of many similar works in Malayalam. The highest literary honour awarded by the Government of Kerala is known as the 'Ezhuthachan Puraskaram'. Sooranad Kunjan Pillai was the first recipient of the honour (1993). The Malayalam University, established by Kerala Government in 2012, is named after Ezhuthachan.

The sand from the compound where the house of Ezhuthachan stood once is considered as sacred. It is a tradition in north Kerala to practise the art of writing in the beginning on the sand with the first finger. ChitturGurumadam is located near present-day Palakkad. The madam is flanked by temples of gods Rama and Siva. The street has an array of Agraharas (where the twelve Brahmin families who migrated along with Ezhuthachan live). Ezhuthachan's samadhi is also situated at Chittur (in Palakkad).

Some relics of Ezhuthachan or his age were sacredly preserved at the Chittur madam. This included the original manuscripts and the clogs used by him. These artefactsand Bhagavatam were destroyed in two fires in end nineteenth century and in early twentieth century. Copies of a sri chakra and the idols worshipped by Ezhuthachan, the stylus, the wooden slippers, and a few old manuscripts are exhibited for visitors at Chittur madam.

Throughout the Malayalam month of 'Karkidakam' (16 July- 16 August), 'Adhyatma Ramayanam' is still recited - as a religious practice - in Hindu homes in Kerala. Malayalis residing in Mumbai, Delhi and other places and also in Gulf countries observe this practice with devotion. According to critic K. Ayyappa Panicker, those who see 'Adhyatma Ramayanam' merely as a devotional work 'belittle' Ezhuthachan.
'Adhyatma Ramayanam' is also a spiritual text that gave momentum to the Bhakti veneration in Kerala. Ezhuthachan, along with Poonthanam Nambuthiri, was one of the prominent Bhakti devotional poets in Kerala.

While reciting 'Adhyatma Ramayanam' every day, let us take a Sankalp that a statue for the great Ezhuthachan is built at his home village in Mallapuram district and that a Memorial of International standard is built there. Let us call this month as Ezhuthachan month.

During this month, Hindus in Kerala and Malayali Hindus all over the world read Ezhuthachan’s 'Adhyatma Ramayana' (Ramayana Parayanam) on all the days of the month. Hindu organizations perform this ritual in almost all temples dedicated to Lord Vishnu. Ramayana is one of the greatest Hindu epics that hold great religious significance. During the 'Ramayana Masam', the recitation of Ramayana starts from the first day of the Karkidakam Masam and continues till the last day.

'Karkidakam' is considered a lean month as it a month of rain and poverty. Hence this month is not considered for any auspicious ceremonies like marriages or house warming or start of new projects etc. However, the month is ideal for treatments, pilgrimage and worship.
Families observing this holy practice must clean their home and surroundings atleast a week ahead of the start of 'Karkidakam' month. Family members should adopt a strict vegeterian diet through-out the month. This should be a period of complete celibacy and even such thoughts should not be allowed to malign your mind. Devotees completely give up gossiping, day sleeping, sarcasm, violence and ego for these will render the benefits of the observance void.

Starting from the first day, every day during the 'Karkidakam' Masam, all the members of the house gather, after sunset. After lighting the evening lamp, they sit close to the ‘Nilavilakku’ or the traditional Kerala lamp and narrate the verses of ‘Adhyatma Ramayanam’ (the Malayalam version of Ramayana). The reading of Ramayana is managed in a way that it ends on the last day of the 'Karkidakam' Masam. The recitation of this epic is also done in Lord Vishnu temples. Several religious and spiritual organisations conduct plays, public discourses, recitals and quiz competition based on Ramayana during this month. Hindu devotees actively participate in these events with full enthusiasm.

The Amavasya (new moon) of the 'Karkidakam' Masam (Karkidakavavu) is dedicated to ancestors. On this day Hindus perform special rituals close to water bodies for attainment of peace of their deceased family members. This ritualistic homage is performed by the male member of the family.
Also during 'Ramayana Masam', Hindus also undertake pilgrimage to the four temples of Lord Rama, Lakshmana, Bharata and Shatrughna, located in Kottayam and Thrissur districts. This ritual is known as ‘NalambalamDarshanam’.
It may be noted that Tamils recite 'Kamba Ramayanam' at homes and temples all over Tamilnadu during this 'Karkatakamasam' or Month of Capricorn.'
- V. Ravi Kumar